More than 200 million kilometers from Earth, in an inhospitable crater that is believed to have been an immense lake, one of the most advanced artificially intelligent robots that human kind has ever built has woken up. Now it is slowly, but surely, powering up its systems and probing the alien world around it, searching for signs of ancient life and sending messages home.

On February 18th, the Perseverance rover landed on the red planet, in the Jezero crater, after a seven month long journey through space, and a decade long struggle to develop and test new, cutting-edge technologies that look and sound like they’re straight out of the latest Sci-Fi movies. Except it’s all very real, and we’re actually living in times when the future is now.

There have been many Mars missions and landings before. About 50% of them had some degree of success, and some of them were ground-breaking, helping humanity understand the distant planet more than ever before, like Curiosity. But this mission is different in many ways.

The Perseverance landing spacecraft (the “sky crane”) was able to analyse the planet’s surface while navigating towards it, compare the information to what it had learned while on Earth, identify dangers and navigate away from them, improve its knowledge on the go, react and adapt, all on its own, without any human real-time intervention. 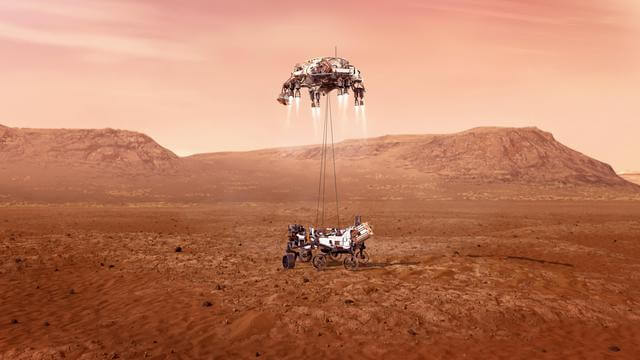 This is the only reason why the rover released by the crane safely landed exactly where it was supposed to, among dangerous rocks,  near menacing terrain features, but in a place that scientists believe is rife with potential sources of mind-bending evidence of ancient alien life.

This is a success story that could have never been written without the help of Artificial Intelligence. Years of research and programming created the “brain” behind the machine’s ability to take care of itself and go where no human has ever gone, at least for now.

Giving robots the ability to become interactive and learn has enabled humanity to expand its reach without endangering any living being, while constantly learning new things about the universe we inhabit, preparing us for tomorrow.

At Softelligence, Artificial Intelligence and Machine Learning, the same concepts that brought Mars one step closer to Earth, are used to empower our customers to digitally transform their businesses and tap into previously inaccessible resources for expansion, improvement and customer satisfaction.

Banks using technology to speed up their customers’ access to information and financial resources, lenders and leasers looking to bridge gaps between wishes, needs and solutions, insurers and brokers transforming and improving the way their customers are empowered and protected, all partner up with Softelligence to create a better universe for their stakeholders.

You too can join us now on our mission to envision and deliver the future.

This website uses cookies to improve your experience while you navigate through the website. Out of these, the cookies that are categorized as necessary are stored on your browser as they are essential for the working of basic functionalities of the website. We also use third-party cookies that help us analyze and understand how you use this website. These cookies will be stored in your browser only with your consent. You also have the option to opt-out of these cookies. But opting out of some of these cookies may affect your browsing experience.
Necessary Always Enabled

Performance cookies are used to understand and analyze the key performance indexes of the website which helps in delivering a better user experience for the visitors.

Analytical cookies are used to understand how visitors interact with the website. These cookies help provide information on metrics the number of visitors, bounce rate, traffic source, etc.

Advertisement cookies are used to provide visitors with relevant ads and marketing campaigns. These cookies track visitors across websites and collect information to provide customized ads.

Other uncategorized cookies are those that are being analyzed and have not been classified into a category as yet.